I remember my first solo cross country in the late 60’s in a Piper Cherokee 140. I had a single VOR receiver, a compass and some sort of black and white instrument that was supposed to tell me where my wings were. My parents sat by the land-line telephone, anxiously waiting news from my instructor after Read More

GTX 345/335 provide simple upgrade path for thousands of aircraft worldwide Garmin International Inc. has announced GTX 345 and GTX 335 all-in-one ADS-B transponders that include Extended Squitter (ES) ADS-B Out, with options for built-in WAAS, as well as dual-link ADS-B In. The transponders will integrate with a wide variety of current and legacy Garmin Read More

The Twin Cessna Flyers will meet in their annual convention at the Charleston Marriott hotel in Charleston, South Carolina from April 27 through April 30, 2016. Following a highly-successful convention in Colorado Springs in 2015, TTCF is anticipating a record turnout of Twin Cessna owners, hosted by Atlantic Aviation at Charleston Executive Airport (KJZI). Featured Read More

Runway excursions are the most common type of accident involving business aircraft, according to the International Business Aviation Council’s (IBAC’s) 2013 Business Aviation Safety Brief. It has also been identified as one of the Top Safety Focus Areas by the NBAA Safety Committee, which recently also produced a new, 16-page guide to help flight departments Read More

The National Weather Service (NWS) Aviation Weather Center (AWC) is replacing the textual products from the old area forecast product with improved graphical forecast products intended to make the information easier to interpret, improving operator safety and efficiency. Through April 11, the AWC is soliciting input on this important weather forecasting tool from the business Read More

In February 2009, NBAA joined with the General Aviation Manufacturers Association (GAMA) to launch the No Plane No Gain campaign, which highlights the important contributions of business aviation to cities, companies and communities across the United States. In the years since, both associations have delivered on that commitment through seven critical, strategic initiatives: Advertising: “For Read More

Numerous business aviation groups and other industry stakeholders from across the country have responded to the Feb. 8 “Call to Action” issued by NBAA President and CEO Ed Bolen, asking their members to contact lawmakers about opposing a plan to privatize ATC and fund it with user fees, which has been proposed as part of Read More

As readers of Twin & Turbine are aware, for the better part of a year, the nation’s general aviation (GA) community has been locked in battle on Capitol Hill against proponents who favor replacing congressional oversight of our air traffic control (ATC) network with a private board, dominated by commercial airline stakeholders, and funded through Read More

Almost two years ago, Air Traffic Controllers began issuing a new clearance relating to Standard Instrument Departure (SID) procedures. You may have heard the following clearance or something similar; “N716RM, proceed direct GOPHER, climb via the KBREW SEVEN departure.” If that sends a chill, you aren’t alone. The “climb via” clearance (and its older cousin, Read More

The U.S. National Transportation Safety Board (NTSB) recently released its final Probable Cause report on the crash of a Beechcraft King Air B200 that occurred at Wichita, Kansas, October 30, 2014. A solo pilot, delivering the airplane to a refurbishment shop after it had just been sold, reported the loss of the big turboprop’s left Read More

…as in, slipperier than. Before DuPont scientist Roy Plunket accidentally discovered Teflon in 1938, engineers at Fiction Friction, LLC were coaxing owls to excrete the substance, analyzing its molecular structure. What, you’ve never seen an owl sneeze into a beaker? The project was abandoned after a marketing test with homemakers was snot received well. Long Read More

Avoiding Hail Hazards The way to not get hailed on is to avoid places where it’s hailing. Talk about a ruined day! It happens a dozen or so times each year. Most of the time it’s small hail, so no damage is done except chipped paint and an apology to your laundress. But, occasionally, hail Read More

The rugged Ozark Mountain region of Arkansas and Missouri is not an easy area to serve with specialized medical care. Roads often wind through wooded hills, adding distance and hours when you have to travel between the small cities dotting the territory. Providing advanced health care in this setting is a challenge. To make the Read More

If you’ve been flying over a long, illustrious career, you’ve no doubt thought about when you’re going to hang up the old headset. And maybe you’ve wondered about the consequences of waiting too long. None of us want to end the symphony on a sour note, but we sure would like to keep playing for Read More 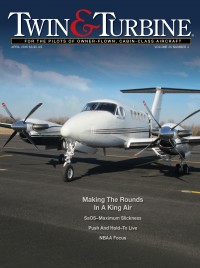