It was late at night; it had been a long day and you’re tired. Since the airplane was ready and the wind on the ramp was gusting to more than 30 kts., you did an “abbreviated” walkaround. Anyway, the flight will take less than an hour and the weather is supposed to be decent. The departure was snowy, windy and bumpy. So bumpy in fact, that it kicked off the autopilot in the climb. When you broke out on top just a minute into the departure to the sight of the moon and stars, not to mention that the ride smoothed out rather nicely, it was proof that you had made the right decision to leave tonight. You scooch in your seat, exhale a breath and admire the moonlit clouds. This is why you fly. Tower sends you to departure control.

Climbing through 2,500 feet and headed to the northwest, departure gives you a right turn to north and a climb to 17,000. The autopilot is still off so you look out the window and start a turn and the climb. Just 100 below, the cloud deck is visible as it moves by at 200 kts, slowly dropping away. The appearance of ice that accumulated during the climb is a surprise. Surface temperature was 33 degrees F. The math was easy: the freezing level was at 1,000 AGL. Curious though, the moon makes the wing look shiny, like it’s still wet. You double-check anti-ice systems and turn to your passengers: How’s the temperature? Everybody warming up? Sorry about the bumps. It should be smooth the rest of the way, you tell them. They all nod in acknowledgement as they, too, admire the view of the moonlit cloud layer. A shudder surprises you because it’s been smooth since exiting the clouds. No traffic, but it felt like wake turbulence. As you turn back to the front, the autopilot should have rolled out of the turn just about now. Then you remember that it’s off.

Why is the bank angle 45 degrees? It should be about 30 degrees. You push the yolk to the left. The ride feels like we’re on a dirt road with tightly spaced waves of hard packed dirt, “chatter bumps.” Like the ridges on a paved highway that announce an approaching toll booth. Why is the airplane vibrating like this? It must have something to do with the ice. You roll to the left more and pull back.

Faintly, you smell an electric train. You know that smell: ionized ozone. Electricity. Probably your imagination. The vibration gets worse; it’s more like a shudder now. Scanning the motors you see the right engine is winding down. Time slows down. You instinctively push the rudder and look out the window. The inboard half of the wing isn’t as shiny as the outboard half. It looks like there was clear ice on the wing itself. Back on the ramp you thought it was wet. Some of the ice on the wing must have broken loose. The beautiful cloud deck that had fallen away is approaching; it’s just below you again. The yolk is almost fully to the left as you return your view to the engine gauges. Maybe the ice did something to the motor, maybe to the wing too. Two seconds later you re-enter the clouds. The moonlight is gone and it gets dark. Back on the instruments. This bank angle can’t be right. How can it be 60 degrees? That must be the electrical smell: the horizon display. Where’s the standby?

A calm voice in your headset says your call sign and asks you to say altitude. You push the left rudder and pull back. The airplane is shaking as the bank increases well beyond 90 degrees, a place that you’ve never seen before. How could that electrical smell mess up the horizon? Maybe I’m in a spin or a stall. Nope, speed is 260 kts. Pull the throttles back. Maybe it’s an accelerated stall. You hear your call sign again: Radar contact is lost, say altitude. Why can’t I roll left? What’s going on? The wind noise is loud as you exit the bottom of the clouds.

The controller repeats his call sign several more times, but no one is there to answer. The flight lasted less than five minutes. And here we sit, my friends, reading our Twin & Turbine. It wasn’t you in that airplane. You didn’t mess up. It was the other guy again. Perhaps you allowed yourself to live vicariously through this event. If so, you probably feel sick to your stomach. If not, it’s because you didn’t know that this is a true story. And that three months ago, the pilot from this story was reading this magazine, and this very column. Just like you. He was a good pilot, just like you.

Viewing a story vicariously is how we learn and prepare. How we stay sharp. How we survive. When we remember events like this one, it makes us pay close attention. His altitude and perception of the event didn’t give him enough time to sort it out. Maybe it wasn’t his fault. Maybe we would have done things similar to what he did. How could anybody deal with his scenario? Is there another way to access a time-compressed or confusing scenario? First, we must be proficient and capable instrument pilots and our airplanes airworthy. After that, it’s up to us to fly the airplane first, then seek solutions.

When you understand the information presented in the operating manual — when you are proficient and one with the machine — expand your flying skills into the domain of lateral thinking. In modern vernacular, that means thinking outside the box; solving problems through an indirect and creative approach, using reasoning that is not immediately obvious. By considering ideas that may not be obtainable by using only traditional step-by-step, checklist type logic. It means not playing with the existing chess pieces, but with finding ways to change the pieces themselves.

Would lateral thinking have helped this pilot? Perhaps not. Maybe it wasn’t an engine failure that our pilot faced. Maybe it was a half-inch of clear ice covering the unheated surfaces of his aircraft. Maybe he should have been deiced. Maybe the pitot static system iced over. Maybe it was an electrical fire. Maybe part of the airframe broke. Maybe it was a failure in the flight control system. Or maybe transiting several cloud layers or turning to the passengers induced vertigo. All realistic possibilities. But conventional logic, training or his proficiency were insufficient in the time allotted.

A perfectly good airplane flown by a good pilot should not crash. Besides, that clear ice thing and inducing your own vertigo wasn’t a fair scenario you say? Well, to that I say you’ve been in too many simulators. They must give you realistic scenarios in the sim, right? And they shouldn’t combine two or three bad things at once. We must be given a fighting chance to fix things. What kind of training would it be if we crashed all the time? Well, real life isn’t fair. You know that from your life on the ground, and you’ve seen life when it was unfair plenty of times. Why would you think it was different in the air? Who says your inflight, real-life scenarios will be fair? Who says that you will have time to sort it out? We can’t train for every scenario. So we train for the ones we know about, the ones that have happened before. The ones that could happen again; the likely ones. Not the unlikely ones. Not the unfair ones. Plus, there isn’t time to practice the unfair, unrealistic scenarios. There are too many. And if we are going to crash anyway, why practice them? All valid points, wouldn’t you agree? Until, that is, something that has never happened, happens.

It’s what you learn after you know it all that counts.

Please take to heart my story-telling version of this catastrophic tale. It gives us a situation to live through vicariously; one to think about and from which to learn. What ever happened to the pilot in our story, I’m sure it was confusing and surreal. We need to give ourselves the best opportunity to resolve inflight problems by being physically and mentally up to speed. By pre-flighting the airplane every time and by staying proficient; by training to be ready for both the fair, and the unfair. And when our training and the published procedures fail, to think outside the box. The FAR’s give us permission. In fact, they tell us to. It may provide the seconds we need. 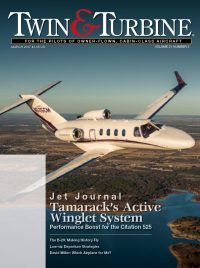